One of the world leaders in kitchen equipment, Breville, is bringing us the next generation in high tech kitchen appliances, the Breville Toaster Oven, a smart oven for the 21st century featuring Element IQ technology.

The new stylish range of ultra-chic highly polished reinforced stainless steel Breville Toaster Ovens come in a number of versions and sizes to accommodate and look stylish in any kitchen. To add to the elegance and style of the Breville Toaster Oven there is any easy to read blue LCD display screen built into the ovens, offering style, as well as easy monitoring of the oven’s progress.

All in all a great little appliance both stylish in its appearance and highly functional with its built in features and functions that ensure great food.

The Breville Toaster Oven series of smart electric ovens offer us cooking features such as toast, bake, roast, reheat, warm, bagel and broil functions, all of which are served by Breville’s Element IQ smart sensor technology which evenly distributes heating and power across its multiple heating elements and maximises efficiency and the even cooking of foods.

Breville’s Toaster Ovens come with built- in pre-set functions which make using the ovens a whizz and straight forward to use and on top of that they are also configurable so that you can get your food prepared exactly to your own personal preferences.

The Breville Toaster Oven even remembers your personal preferences or temperatures and times and automatically stores and uses them next time you use the oven.

Both feature Breville’s smart oven technology the Element IQ smart sensor which offers independently distributed heat through a number of heating elements to offer power where it is needed and reduce and save on power where it isn’t required. 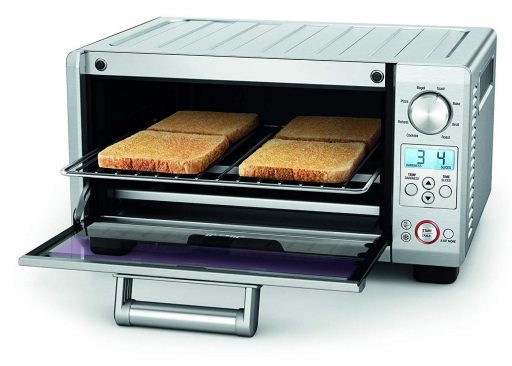 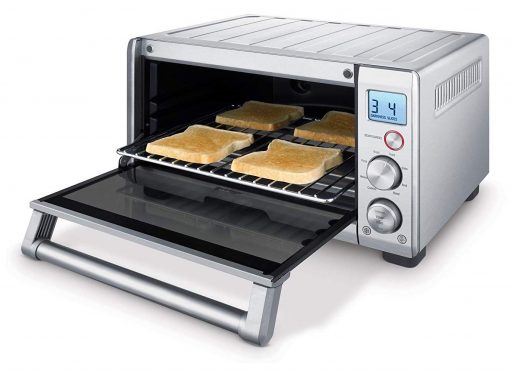 The Breville BOV650XL is the smaller brother of the Breville BOV800XL models and its dimensions are: width 16.5 inches, depth: 14.25 inches and height: 10 inches. The interior measures 0.6 cubic feet and the power output is 1800 watts. The slightly reduced size makes this an ideal model for the kitchen where size is at a premium.

Again the Breville BOV650XL offers a number of pre-sets like its bigger brother but this model has eight pre-sets which include broil, bagel, reheat, pizza, cookies, bake and toast.

It comes with a 4 slice capacity for toasting and like its larger brother the Breville BOV800XL comes with a removable crumb tray for easy cleaning. The unit also features a defrost mode.

The Breville BOV650XL comes complete with accessories including a broil rack and baking pan. 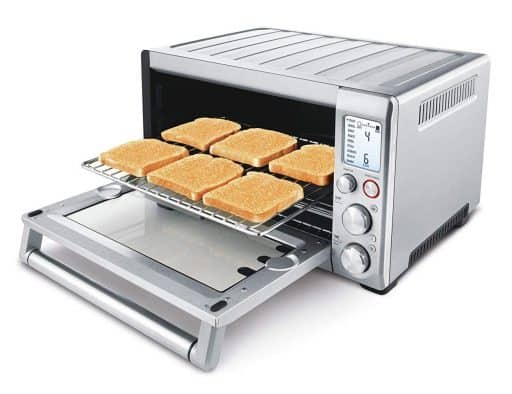 The Breville BOV800XL electric oven is the larger of the two models and its dimensions are: width 18.5 inches, depth: 12.5 inches and height: 10.75 inches, the interior of the unit measures 0.8 cubic feet with a power capacity of 1800 watts.

The Breville BOV800XL has nine cooking pre-set functions: pizza, broil, bagel, bake, cookies, toast, roast, warm and reheat that give you suggestions to cooking times and temperatures, all of which can be customised to your personal preferences and stored for the next time you use the setting. With the Breville BOV800XL you can also reduce your cooking times by as much as 30% when using the ovens inbuilt convection option.

You can make perfection pizza just how you like, mouth wateringly succulent meat and enjoy delicious roasts, bake and much more. The unit features an auto-eject wire rack which has a choice of three heating positions in the oven and the toasting unit can toast up to six slices of toast and features a removable crumb tray.

The Breville BOV800XL comes with a range of accessories including a broil rack, a removable crumb tray and pizza and baking pans.